A good cash flow analysis might be the most important single piece of a business plan. All the strategy, tactics, and ongoing business activities mean nothing if there isn’t enough money to pay the bills. And that’s what a cash flow projection is about—predicting your money needs in advance.

By cash, we mean money you can spend. Cash includes your checking account, savings, and liquid securities like money market funds. It is not just coins and bills.

Make no mistake: Profits aren’t the same as cash. Profitable companies can run out of cash if they don’t know their numbers and manage the cash as well as the profits.

When your business spends money on inventory, debt repayment, new equipment, and other assets (to name a few examples), that money goes out of your bank account but doesn’t show up on your Profit and Loss Statement. When your business makes a sale to a customer on account, that amount adds to sales in your Profit and Loss Statement, but it sits in Assets as Accounts Receivable until the customer pays.

There are several legitimate ways to do a cash flow plan. We have the direct cash flow method here, but there is also one called Sources and Uses, or Indirect, that can be just as accurate.

And, experts can be annoying. Sometimes it seems like as soon as you use one method, somebody who is supposed to know tells you you’ve done it wrong. Often that means that expert doesn’t know enough to realize there is more than one way to do it.

The illustration here shows a sample cash flow based on the same numbers in two previous posts, how to forecast sales and how to create an expense budget.

Likewise, your payments of accounts payable have to link to the balances of payables and the costs and expenses that created the payables. Vital as this is to business survival, it is not nearly as intuitive as the sales forecast, personnel plan, or income statement. 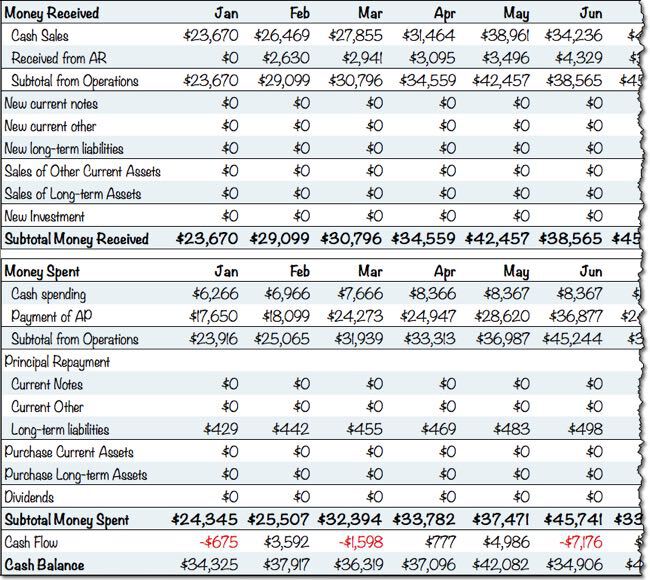 Estimating the flow of receivables

In this case, the sales on credit are 10 percent of the estimated total sales in the Sales Forecast, $26,630. That’s the result of Garrett’s assumption, based on the nature of his business. And the money involved comes in one month later.

Estimating the impact of inventory

Inventory also affects cash flow. The cost of inventory that shows up in the Projected Profit and Loss is related to timing of sales. The actual cash flow implications of inventory depend on when new inventory is purchased, as shown here:

As with Accounts Receivable in the previous illustration, the inventory analysis depends on information from the Sales Forecast, and it sends information to both the Projected Balance Sheet (Ending Inventory) and the Projected Cash Flow (Inventory Purchase). 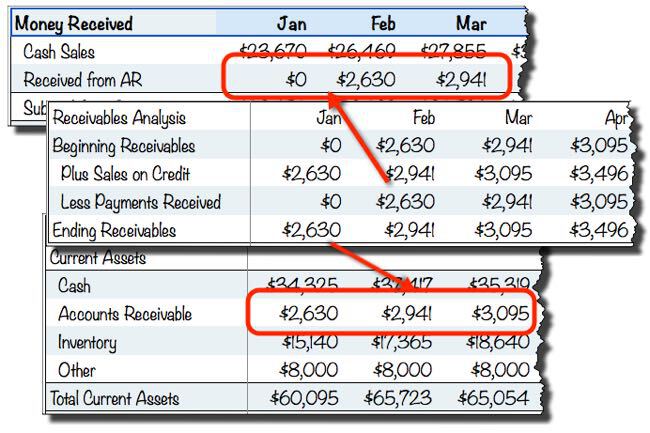 Estimating the impact of payables

Most businesses wait a month or so before they pay invoices for goods and services received from other businesses. That means we can save on our cash flow by holding back some money and paying it later. With proper accrual accounting, that money is recorded on the Balance Sheet as Accounts Payable.

Estimating Accounts Payable takes a careful combination of calculations and assumptions. First we have to collect the full amount of payments. Then we account for payments made immediately, not held in Accounts Payable. After that, we estimate how long, on average, we hold payments. That analysis is shown below: In this case, it is assumed that the store will pay its bills about a month after it receives them.

Cash flow is about management

Reminder: You should be able to project cash flow using competent educated guesses based on an understanding of the flow in your business of sales, sales on credit, receivables, inventory, and payables.

These are useful projections. But, real management is minding the projections every month with plan versus actual analysis so you can catch changes in time to manage them.

If you have questions about cash flow, let us know in the comments and we’ll do our best to answer them for you.